Politecnico di Milano makes use of SensoJoints in a research project for rehabilitation robotics.

For an application in a research project concerning rehabilitation of knees, scientists of the NEARLab and WE-COBOT laboratory (Politecnico di Milano) in Italy recently have purchased a SensoJoint - and to the outmost satisfaction of staff involved, the performance of the Sensodrive drive unit delivered an outstanding result.

How weak leg muscles become strong again
The goal of the researchers is to enhance and improve lower-limb motor rehabilitation outcomes by means of cooperative human-robot interaction at the knee joint. For that purpose, the SensoJoint was laterally mounted to a special wheelchair and attached to the patient's lower limb by means of an orthosis. Thanks to its high-fidelity torque control, the SensoJoint permits to achieve a wide variety of training modalities, ranging from rigid mobilization exercises to low resistance behavior, which are involved during different phases of the rehabilitation process. Finally, the SensoJoint sensors can also permit to achieve high accuracy measurements for the clinical assessment of the rehabilitation treatment.

Perfect training by combined therapy
Robotic systems and Functional Electrical Stimulation (FES) are common technologies exploited in motor rehabilitation. However, they present some limits. To overcome the weaknesses of both approaches, hybrid cooperative devices have been developed, which combine the action of the robot and that of the electrically stimulated muscles on the same joint. Two modules were combined to achieve a successful training procedure: motor neurons were stimulated by the FES to artificially generate muscular contractions; simultaneously the movement itself was enhanced by the SensoJoint, used to increase the moving force of the patient and meanwhile precisely regulated by flexible control algorithms.

Thanks to the torque-controlled drive, the control logic can directly regulate the interaction forces between the human limb and the robotic system, both assisting the motion of the leg and accommodating human-initiated movements that are sensed by the SensoJoint torque sensor. This principle, well known from E-bikes, is tailored to detect even the smallest amounts of force, allowing the subject to perform movements without perceiving the robotic resistance. In fact, the SensoJoint contributes as a fine-tuned amplification factor, so the patient finally moves his leg in a controlled manner through his own will.

In subsequent training phases, when a certain degree of mobility of the leg muscles is regained, the SENSO-joint can serve as a training devices as it can apply resistive forces to train the muscular forces of the users. The variable interaction forces can be regulated to train to simulate a counterforce that the patient must overcome. As with fitness device, the load profile can therefore be dosed variably and absolutely patient-specific.

Individual Training by Sensodrive Experts
Before starting this challenging project, two members of the NEARLab research group were invited to the Sensodrive site in Wessling, Germany. During a workshop organized in common taking into consideration the specific conditions of the project, they gained experience in the integration and operation of the SENSO-joints and had time to familiarize themselves with the relevant features in a comprehensive hands-on training.

And the SensoJoints Have Delivered a Strong Result
The decision for the sensitive SENSO-joints had been taken after a thorough market analysis carried out by the researchers of the NEARlab. In the end, the researchers were really impressed with integration level and performance of the drive unit obtained – for the benefit of numerous patients in future. 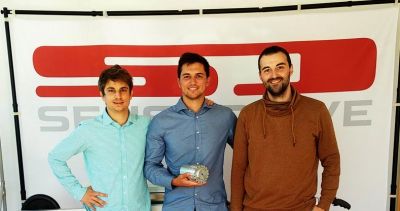