The innovation prize pays tribute to the VibroTac technology and, above all, to the excellent transfer of technology between the DLR and Sensodrive.

Motivated by the innovation prize and the variety of positive responses, Sensodrive has already developed a productization and marketing strategy.

This will be put into practice within the framework of a licence agreement between the DLR and Sensodrive in the next two years. In addition to the patent rights and the technological know-how Sensodrive can access the network of future final users and system suppliers.

To this means, further VibroTac prototypes will be built which include the first improvements, such as the realisation of a Bluetooth interface, up to the end of 2012. "It is our greatest aim and motivation to make everyday life easier for people with sight and hearing impediments with the VibroTac technology.", explains Sensodrive Managing Director Norbert Sporer. " On top of that there are almost unlimited possiblities for application in industry and in the games world.", Sporer continued. 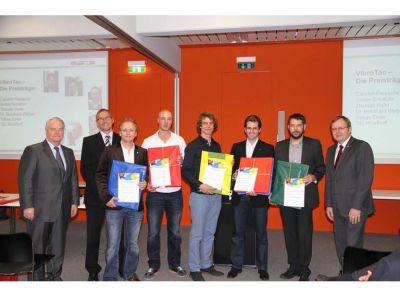